Today I give myself the edge... 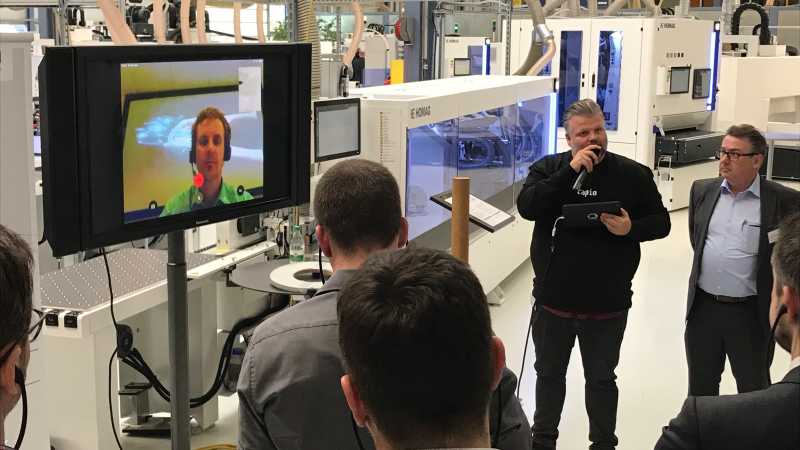 ... but not in the conventional sense (festival mood like "ein Prosit der Gemütlichkeit"), but in the context of the REHAU Edge Day as one of several lecturers. The day was divided into three blocks. The day started in the morning in Schopfloch at HOMAG with the final preparations for the individual six stations, which were intended to give visitors an insight into the subject of edging and digitization. #edgeisdigital was the message that regularly accompanied the customers in different use cases and was also practically demonstrated. After a short change of location, the second block continued in the afternoon for all participants. Many lectures on the topic "Digital" were on the agenda. Julian Spöcker presented tapio again in this context. The third and last block, the legendary "Kantenschmaus," had no real agenda 😉

During my early days at tapio, I became aware of how digitization and machines, i.e., active assets that generate data, fit together. But how do passive assets, i.e., materials or tools that do not produce their own data, fit into the infinite history of "digitization"? For a long time, the interplay of active and passive assets was more of a theoretical construct (everyone knows the classic "what if..."), which was brought to life for the first time on the edge days.

Four of us from tapio were on site and were responsible for two of the six stations. The first station was the focus of the Rehau integration into the tapio ServiceBoard. A live demonstration showed the visitors how service tickets can be sent to different service partners using just one application. In the case of REHAU, we simulated a faulty edge during the production process. A service ticket was opened together with the visitors. Short description of the problem, the edge number scanned and three pictures, and the ticket was ready. Often smaller problems can already be solved using the pictures and description. If this is not possible, the ServiceBoard offers the possibility to start a video diagnosis with the REHAU service employee. When suddenly Alex (REHAU application technician) appeared on the big screen - LIVE -, we had all visitors on our site and a quiet, honest "WOW" accompanied the beginning of the video diagnosis. Direct communication with REHAU allows problems with the edge to be solved directly without the need for a service technician to be on site. The advantages were obvious and did not have to be shown to the customers in detail. The stations two to five showed further examples around the topic #edgeisdigital.

Arriving at station six, another person with a black sweater and the tapio lettering appeared as well as Felix from HOMAG and Matthias from REHAU. As briefly mentioned at the beginning, the theoretical construct of the interaction of active and passive assets now became something tangible and got its own stage at station six. The Stage is yours... For the first time, visitors heard words like tadamo (tapio data reference model), intellisettings and Rehau Kantenbandassitent. Question marks in the faces of the visitors, because nobody had heard or seen anything about it before. But the question marks disappeared very quickly as soon as the demonstration started. Take an edge tape from REHAU, scan the QR code on the edge with the intellisettings app and get edge-specific, i.e., unique, data from tadamo in the app surface. Now the machine operator can transfer the data to the HMI of HOMAG Edgeteq with just one "click" in the app. Magic? No. Rather the perfect interaction of different tapio partners in an ecosystem on the same technological basis. The machine operator can then load the transmitted data into a machine program and start production. Can I get an Amen? AMEN

At the REHAU Edge Days, it was really very nice to see what can be achieved together in an open ecosystem in the wood industry, how the customer and its benefits are in the clear focus and that the buzzword "digitization" has become a word with practical power. tapio is all about a neutral approach, which should pave the way for a common, digital future based on partnership and thus the customer already gets a substantial added value now, but will also get it in the future. I am looking forward to further events from our partners where we can turn vision into reality together.

In this sense, a "prosit" not for comfort, but a "prosit" to all the companies that are taking up the challenge of the digitalization and are not taking this step alone but will go together with all our business partners and us. Cheers!