Looking back to the Furniture Manufacturing Congress 2018

Digitization was a big topic at the furniture manufacturing congress. With the upcoming LIGNA, the question arises what could have changed since 2018. 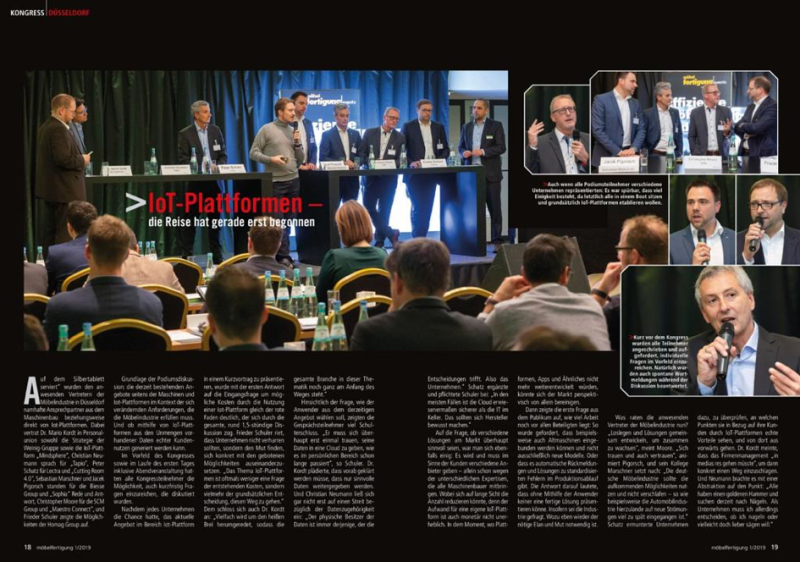 Unbelievable, but it's now almost five months since we spoke at the Congress of Furniture Production in Duesseldorf. With the recent Hanover Fair and the upcoming LIGNA, the discussion about the whole topic of digitization is intensifying and I am looking forward to what we will see at LIGNA.

At the Congress in November 2018 it became clear:

that digitalization also requires an answer for the existing machine park, simply focusing on new machines is not an answer.

I took this as an opportunity to look back, to ask myself, has anything changed over the months?

Although the topic of digitization is on the agenda of all manufacturers and producers, initiatives are being launched, and technologies are being evaluated. However, all too often this is a purely technical discussion. Customer focus, in particular, is only slowly gaining ground. Matthias' conclusion on the Hannover Messe 2019 confirms that this is a general topic. Only when we start to think about what is actually the added value, what could be done differently from the customer's point of view, will the topic of digitization gain a foothold.

After the first peak phase, a technology euphoria, we are now all in the stage of reality. It is now a matter of having a strategy at management level and a business goal. Technology can do a lot, if not almost everything, but it also needs a goal from a business perspective. This is where I see the most significant problem these days. The technology behind "digitization" is changing the fundamentals far too much to be able to continue with classic business models (for a little more on this in another Blog from me). However, this also requires an open discussion of the topic at management level and, very importantly, a departure from "we have always done it this way". Here you can certainly learn a lot from software development, where the "change" is much more established than in management.

At the congress, one of the presenters explained it very nicely when he recapped how they approach the transformation internally. The simple answer was "We have given it to the trainees as a task because they are much more playful and open with new technology/topics."

It is and remains a delicate plant whose fruits need a few years to reach their full splendor. However, as other countries are pressing ahead unconditionally in the field, braking on this field will lead to a significant competitive disadvantage in the long term. With the market clouds just emerging, at least if one believes the economic forecast, it will be very exciting to see how digitalization develops. For many companies, the question will probably arise as to whether they can/want still afford it. As a company doesn't afford it will be helpful in the short term, but in the medium term will presumably lead to missing the train and being left behind in the long run.